Look how they fly – these two little girls – and how effortlessly, too, despite the fact that they are almost 260 years old! Their artistically styled hair, held in place with ribbons, crowns the heads of the chubby-cheeked cherubs. Their heads are inclined and their gaze – pointing obliquely downwards through their almost closed eyes – show that they were made to be viewed from below. Ignaz Günther, the foremost artist of his time in Munich, portrays the rounded bodies of small children with anatomical precision. Perhaps his own children – nine in total – were an inspiration for him. That could well be the case considering how realistic the two little figures are. Wings, a putto’s most important attribute, cannot of course go missing. Admittedly, the feathers are very delicately carved and are more decorative citations than practical flight aids.

Which church did these two delightful little heavenly creatures adorn? Comparisons with other angels by the southern German master suggest that they were used to decorate an altarpiece or a pulpit. Putti with ribbons and flowers in their hair are frequently to be found in Günther’s work.

We went looking for clues in an endeavour to throw light on the lost history of the two celestial children.

In the 1980s when, as our research revealed, the putti appeared on the art market in Munich, the paint applied in Günther’s day had been covered in gold. It was already assumed at that time that this was not orginal. According to oral tradition, they were given their golden appearance when the putti were added to a festive carriage in 1888, along with two other angels, as ornamental objects. That year, a magnificent festive procession was held to mark the centenary of King Ludwig I, albeit two years later than planned as his unfortunate successor, King Ludwig II, drowned in Lake Starnberg in 1886. According to the progamme of events an oval portrait of the monarch in a ‘wonderful, richly giled frame, borne by flying angels and genies’ adorned the carriage of the ‘painters, gilders, paintmakers and decorative artists’. It continued: ‘An angel and a genie holding the monarch’s crown hovered above the frame’. The gentlemen Radspieler and Lippert were responsible for the carriage that was decorated in the late Rococo style. While the carriage was entirely the work of decorative painters, it was expressly mentioned in the progamme of events that the angels and genies on the frame were ‘all … exquisite old figures’.

Who was Josef Radspieler (1819–1904) who had a penchant for Baroque art that was unusual at that time? The trained gilder operated his own workshop in 1841 and later, borne by his success, ran a large company in Munich. He supplied furniture, frames and mirrors to the royal court as well as private clients, including a number of artists such as Lenbach and Spitzweg. Another source of income for the Radspieler company came from the furnishing and renovation of churches throughout Bavaria, including St. Maria in Ramersdorf, the Asamkirche and the Frauenkirche (cathedral), Berg am Laim and the Bürgersaal (Citizen’s Hall) in Munich. In the process, the Radspieler company bought up Baroque altarpieces that were no longer considered modern and, in this way, acquired a stock of religious figures.

His work for the royal court, including the furnishing of the royal apartments in the Residenz (palace), earned Radspieler the title ‘Gilder to the Royal Bavarian Court’. The Radspieler company even made the throne for King Ludwig II and was involved in work on the famous winter garden above the Court Garden wing of the Residenz. Radspieler’s keen eye for quality and beauty obviously resulted in his use of the four ‘old figures’ for the festive carriage. But where did Radspieler first find these exquisite decorative objects?

In his monograph on Ignaz Günther published in 1920 Adolph Feulner aleady mentions that the angels from the Radspieler/Lippert Collection decorating the festive carriage had originally been in the private chapel of the Knöbl family which stood in Sendlinger Strasse in Munich. The art historian Hubert Wilm later cites the provenance given by Feulner in his own work. He points out that the angels had supported a portrait medallion of the monarch during the festive procession to honour King Ludwig. To match the figures and the frame they had been painted a golden-bronze colour.

The Ignaz-Günther expert, Adolph Feulner, may well have learnt of the figures’ Knöbl Chapel provenance from an oral source. A descendant of the Radspieler family, Peter von Seidlein, confirmed – to the Germanisches Nationalmuseum – that his grandparents had acquired a number of decorative objects when the Knöbl Chapel was demolished.

The chapel had been commissioned by Franz Joseph Knöbl, a member of the council ‘Äußere Rat’, a barber and surgeon. In 1745 he acquired a house, no. 30, in Sendlinger Strasse. That same year he had a chapel built there that was consecrated in 1746. At this time Ignaz Günther was still active in the workshop of Johann Baptist Straub. For this reason, it is therefore unlikely that Günther would have been personally commissioned to carry out the work. Evidence exists, however, that in 1759 Ignaz Günther was in contact with a Mr. Knöbl. In August that year a position for a priest was created for the Knöbl Chapel (the so-called Knöbl benefice). It is quite possible that Knöbl commissioned Günther to redesign the altar on this occasion. The chapel was demolished in 1882. According to oral tradition, the figures then came into the ownership of the Radspieler company.

The somewhat convoluted provenance of the two putti with its adventurous twists and turns, from which the art-historical reception of works of the Bavarian Baroque era in the past 250 years can also be read, has largely been reconstructed in the course of our research work. One question, however, remains unanswered – namely the figures’ original iconographical and architectural context that, at present, cannot be solved without further evidence and source material. 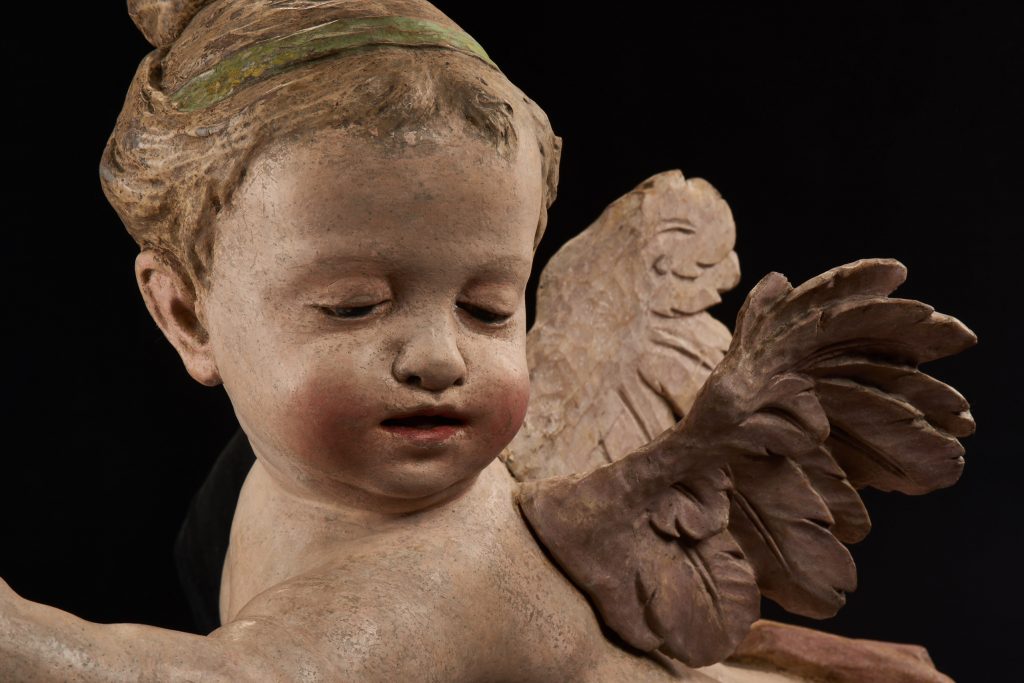 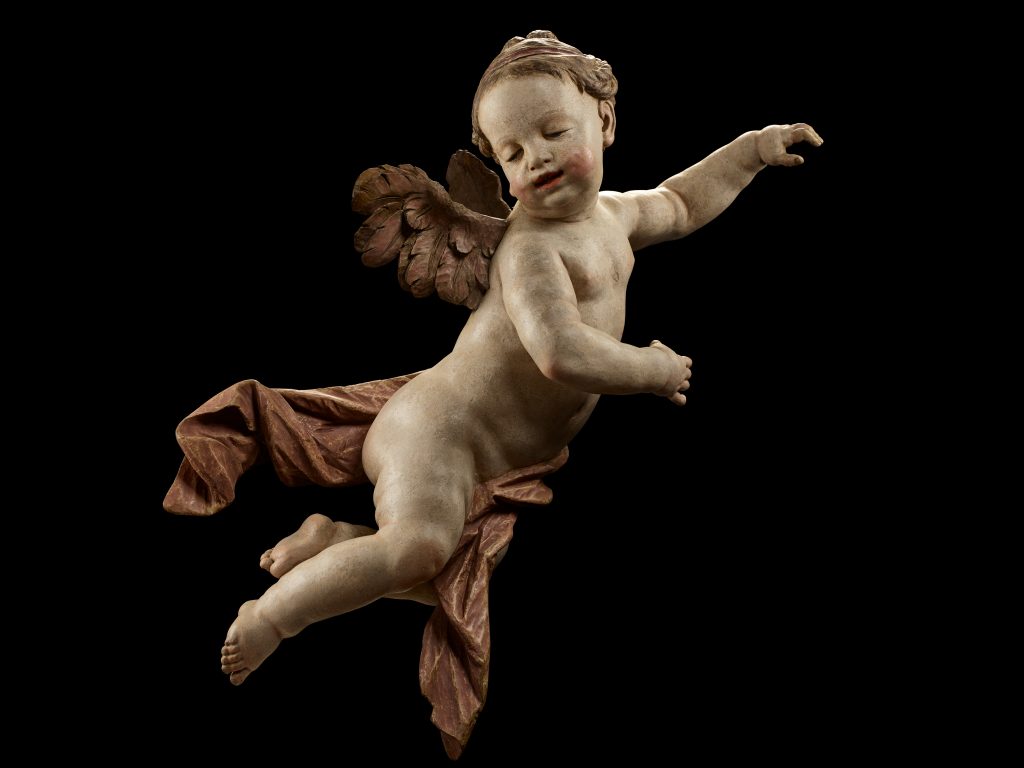 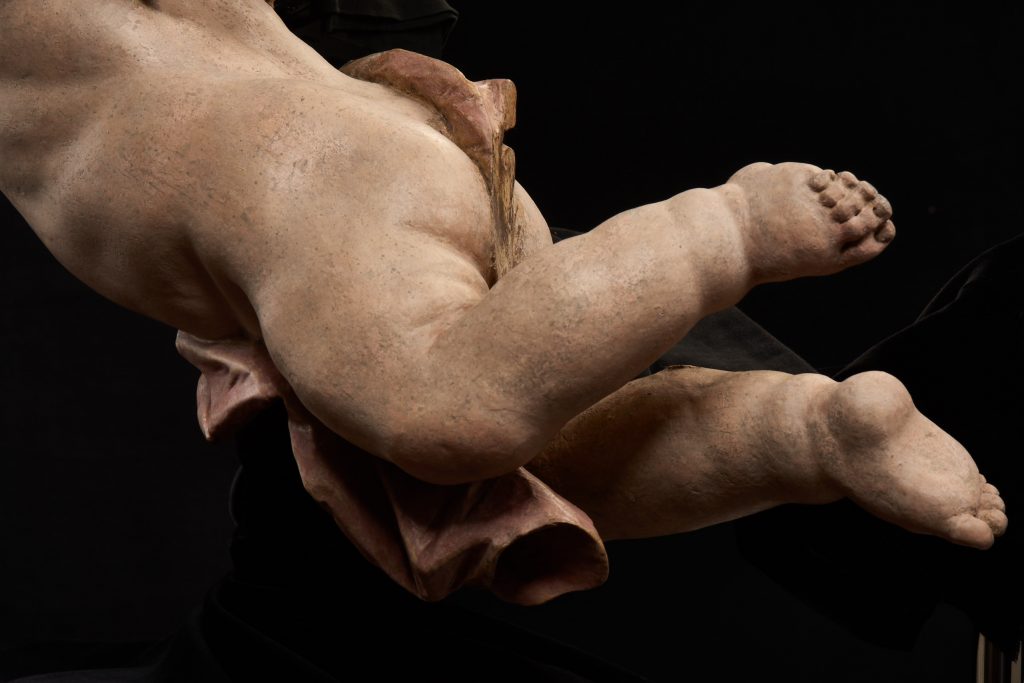