A Happy End for the Isenheim Altarpiece in Colmar

Since its foundation 140 years ago Julius Böhler has sold many important works of art to private and public collections. Hardly any other transaction was as thrilling and embraced so many centuries as the sale of the two small sculptures by Niclaus of Haguenau:

The story begins back in 1905. The founder of the art trading dynasty, Julius Böhler, had just acquired two extremely well sculpted and expressively carved figures, not definitively attribubted to any one artist, from the collection of the Großenhain cloth merchant Richard Zschille for his own private collection. In 1911, Wilhelm Vöge – a professor at Freiburg University – saw the two figures in the Böhler Collection and was surprised at the similarity of the carved sculptures with the centre shrine of the Isenheim Altarpiece. This includes Saint Anthony, flanked by the Church Fathers Saint Augustine of Hippo and Saint Jerome, as well as busts of Christ with the Apostles in the predella shrine. Vöge attributed the figures to Niclaus of Haguenau. He was not aware of the fact that, in 1823, Abbé Reichsstätter – who had been looked after the art collections in Colmar at that time – had given the two peasants with the cockerel and the piglet, kneeling at Saint Anthony’s feet, to the local hospital to be used in a nativity scene. Since then, their whereabouts had remained unknown. He pursued the matter further. Heinrich Alfred Schmid,1 a professor for art history in Prague and renowned expert on Grünewald, had published the old inventories of the Colmar collection in his publication on the Isenheim Altarpiece that appeared in 1911. In these he mentioned two small figures at Saint Anthony’s feet: a herdsman with a pig and a peasant with a cockerel. Schmid also included the dimensions of the figures that were no longer in their rightful place. One of his pupils, Professor Heidrich of Basel, came to the correct conclusion as he could remember the figures in the Böhler Collection which he, too, had seen. The two figures could subsequently be attributed to the sculptor Niclaus of Haguenau and it was proven that these were indeed the missing carvings from the centre shrine of the Isenheim Altarpiece in Colmar, created by Niclaus of Haguenau and Matthias Grünewald in 1512–1516.2

The discovery was a sensation. The Schongauer Society, founded in Colmar in 1847, made a sustained effort to acquire the works. Julius Böhler, however, did not want to part with the two figures. The related correspondence between the association and Julius Böhler has survived:

It has come to the attention of the Schongauer Society in Colmar e.V., in whose hands the administration of the Musée Unterlinden lies, that you are in possession of two wooden statuettes that were once part of the Isenheim Altarpiece in Colmar. Those very same figures vanished from Colmar at the beginning of the 19th century. One statuette depicts a peasant that offers up a pig as a sacrifice; the other young man sacrifices a cockerel.
The Schongauer Society ventures to ask most respectfully if you would be willing to consider selling the statuettes and if a possibility exists for these statuettes to be incorporated once again in the Isenheim Altarpiece.
Should you possibly feel able to accommodate our wish, you would make the town of Colmar exceedingly grateful and promote the art of Alsace as such to a considerable degree.

I remain respectively yours,

I have received your esteemed letter.

Letting you respectively know that I part with absolutely nothing from my private collection. I have already received the offer of large sums from museums and art lovers for many things, if ever I wished to sell anything. Should you ever come to Munich it would please me greatly to show you the figures. Prof. Feuerbach, to whom you have written, visited me today and I told him the same.
It would otherwise have been a pleasure to be at your service to return the figures to their original place.

As we know from a letter from Julius Böhler to Professor Schmid, Julius Böhler would certainly have been prepared to part with the figures but only in exchange for a work of art that he would have particularly liked to have acquired:

The most honourable gentleman

I have received your valued letter and thank you most sincerely for the transmission of the correspondence from Strasbourg. A whole stream of people has now made its way to me. Each of them wants the two peasant figures from the Isenheim Altarpiece and I am indeed pleased that they have become so famous thanks to your kindness.
The Museum Commission in Colmar has also already written to me; Prof. Feuerstein was similarly here. However, I have had to tell each of the gentlemen that there is nothing to be had from my collection. For if I had already wanted to part with items from it, I would have already received quite considerable offers. These offers however are of no interest to me as I have what I want and find much satisfaction in my collection.
What must happen is for me to be offered something in exchange that would similarly and always be of pleasure and interest me for my collection. In such a case I would, in any event, not be disinclined.

The ownership of the works, however, did not change. Julius Böhler had copies of the figures made at his own expense and gave these to the museum. In 1917, during World War I, the Isenheim Altarpiece was removed to Munich for ‘safekeeping’ where it became one of the most visited exhibits in the Pinakothek. It only returned to Colmar in 1919. Also in 1919 the two Hagenau figures were added to the list of nationally important cultural assets – a sale to Alsace, that in the meantime had become part of France, had, therefore, been ruled out.

In 1977 Julius Harry Böhler sold the two sculptures to the Baden State Museum in Karlsruhe. Ultimately, the efforts made for the return of the works, begun in 1911, came to a happy end.

Thanks to cultural political diplomacy and a complicated exchange process between the Baden State Museum in Karlsruhe, the Musée Unterlinden, the Louvre and the Musée des Arts Décoratifs in Paris, the peasant and the herdsman took up their places again – 154 years later, in 1984 – at Saint Anthony’s feet, on permanent loan from the Federal Republic of Germany. 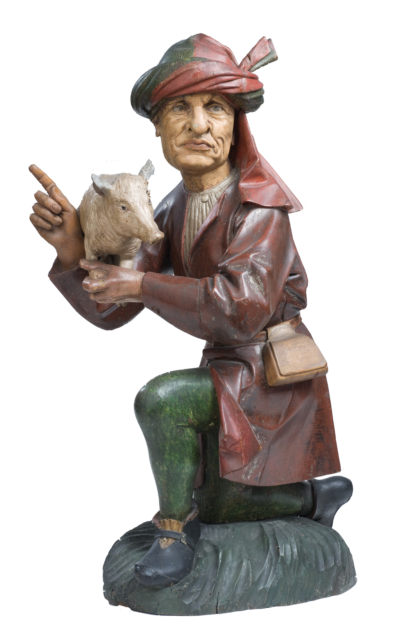 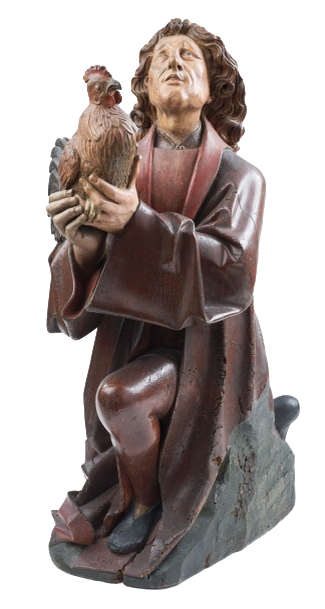